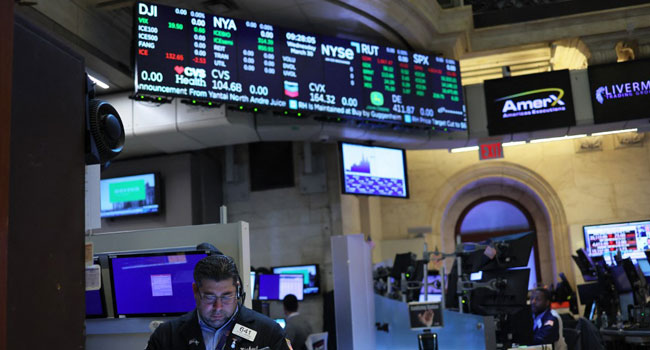 Stock markets were relatively subdued on Monday while oil prices rose as Western nations eyed more sanctions on Russia, but Twitter stood out as its shares soared after Elon Musk purchased a major stake in the social network.

Twitter’s stock soared more than 25 percent after news of the Tesla boss’s investment.

According to a document filed with the US Securities and Exchange Commission, Musk acquired nearly 73.5 million Twitter shares — a 9.2-percent stake in the company.

While Twitter is not large enough in terms of capitalization to impact the wider market, market analyst Patrick O’Hare said the move has bolstered sentiment.

“What the market is really responding to is the timing of Musk’s purchase and the supposition that it is an encouraging signal that longer-term investment opportunities might be availing themselves now in former high-flying stocks,” he said.

The tech-rich Nasdaq had an especially buoyant session, climbing nearly two percent behind strong gains in Amazon, Apple and other tech giants.

The EU said it is urgently discussing a new round of sanctions on Russia as it condemned “atrocities” reported in Ukrainian towns that have been occupied by Moscow’s troops, while White House National Security Advisor Jake Sullivan signaled more US sanctions would also be announced this week.

“Even fresh sanctions talk does not appear to be having much of an effect, as the market learns to look past the immediate hit to earnings,” said analyst Chris Beauchamp at online trading platform IG.

“The strength of Friday’s payrolls report remains a motivating factor too, even if it has also emboldened Fed policy makers to think more seriously about a 50 basis point hike next time they meet,” he added.

Oil prices rallied after falling last week on concerns about demand given Covid lockdowns in China and the 31-nation International Energy Agency agreeing to tap its vast reserves to offset the removal of Russian exports.

“Oil prices have rebounded after last week’s big falls with US prices recovering back above $100 a barrel, in the wake of renewed calls for further sanctions against Russian oil and gas imports,” said market analyst Michael Hewson at CMC Markets.

“This appears to be outweighing concerns over Chinese demand after the whole of Shanghai, a city of 25 million people, was put into a Covid lockdown,” he added.

Shanghai – Composite: Closed for a holiday